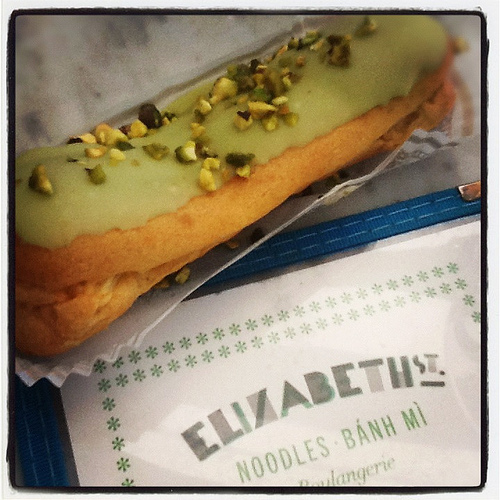 Last weekend, I met up with my friends Sam and Samuel for a brainstorming session to prepare for a big project coming up in the next few months.

Sam is a Sunday regular at Elizabeth Street Cafe - you know, the new fancy Vietnamese bistro not owned by Vietnamese people, and instead owned by the Lambert's of Lamberts (Fancy) BBQ and Perla's fame.

I immediately fell in love with the clean design, bright Vietnamese-inspired color palette, and a French bulldog (I know!) who appeared in the adjacent patio section. We were all in love with the graphics and general design. There was a certain aqua window frame that made my heart skip a beat. 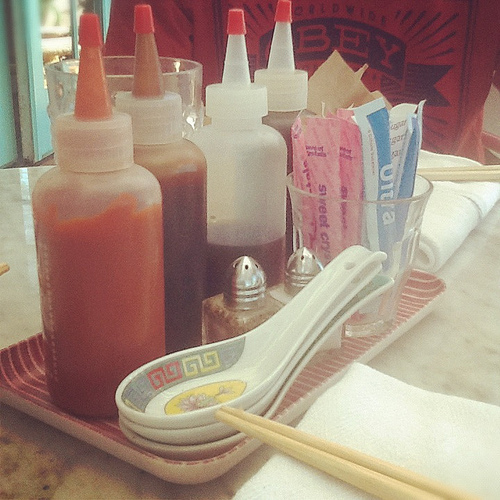 Having been to plenty of Vietnamese restaurants during my childhood and having visited Vietnam twice in my adulthood, it was surreal to be in a space that drew elements from the motherland while being full of non-Vietnamese people. The restaurant used colors remiscent of the less modernized areas of Saigon, but the ambiance was so quiet and clean comparatively. There were no motorbikes, no dust, no impoverished people. A French colonial dream, perhaps?

When it came time to make decisions, I ordered the lemongrass tofu banh mi and a pistachio eclair and nibbled on a few bites of a very tasty mango salad that was brought to Sam on the house. It pays to be a regular and the reward is paid out in shredded mango in a vinagrette with basil and green onion. 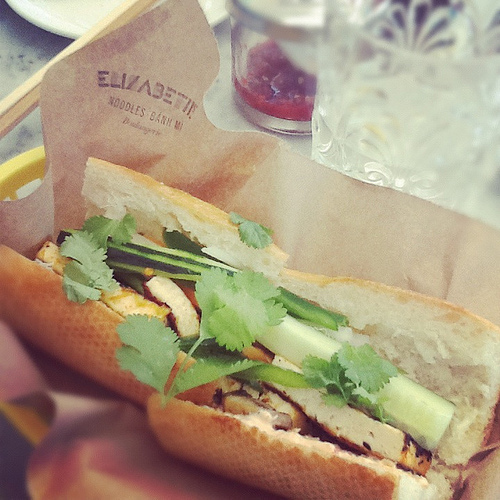 My lemongrass tofu banh mi was good. The bread was warm and soft on the inside and crispy on the outside as banh mi should be. I enjoyed the mayo which was blended with chili paste. However, the $7 price tag was high for the food of my peoples. Being from Houston, banh mi are usually $3-5.

Sam ate not one, but two pistachio eclairs and a huge bowl of fried keffir lime fried chicken vermicelli (bun). I wish I would have photographed the bowl in front of her. She could have easily fit inside that bowl. There was much remarking of how good her dish was, but alas she was defeated by it's giant size and had plenty of leftovers that night. Sam had predicted her fate before ordering, telling us the bun portions could feed two.

Samuel and his lady each had the keffir lime fried chicken banh mi and shared the Nutella eclair (which by the way, was very chocolate-y). 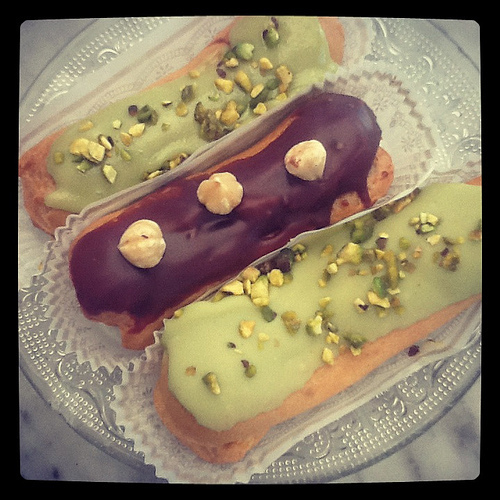 Elizabeth Street's French pastries were far better than the majority of the Vietnamese places I've been to growing up. They tasted fresher and they weren't wrapped in plastic. The display near the hostess stand was quite beautiful, more like a dessert table at a wedding than a bakery case. These pastries were also 3-5 times more expensive than what's I'm used to, but I'd say in this case they're worth the splurge. I am a dessert girl, after all. Have you seen the cake pops portion of this blog? ;)

Overall it was a pleasant experience. Good food, great company and ideas. I do wish the banh mi was a little cheaper. I plan on coming back with my fancy camera and trying the veggie pho or mushroom and tofu vermicelli sometime and another dessert or two, of course.